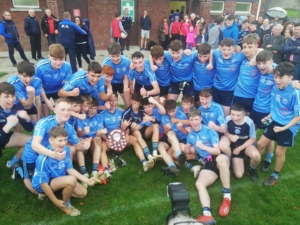 Pride of place this week goes to the U-16 team who produced an inspired performance to win the South Down U-16 championship at Rostrevor on Sunday afternoon.  The Bridge proved just too strong for their Warrenpoint opponents as they won by 5-15 to 2-14.  Congratulations to the team and management.

Mayobridge senior team wind up their Division One campaign on Saturday afternoon when they take on Rostrevor away, throw-in; 5.00.p.m.

Congratulations to our neighbours Warrenpoint on reaching the Down Senior Championship final and good luck in the final.

Mayobridge GAC hosted U–8 and U–10 tournaments on Saturday. The U–8 tournament commenced at 9.30am with six teams in attendance. Despite the forecast the weather held up for the duration of the morning tournament. All games were played in a sporting manner with some great skills on display from all teams. The Gaels made it to the semi final stage and narrowly lost to Clonduff who were the eventual winners to take home the Rhys Brady Memorial Shield. The Ogs also gave a great account of themselves and made it to the quarter– final stage. Ballyholland were the eventual winners taking home the Plate. At 1.30pm the U–10 competition began, the weather took a turn for the worst and in very challenging conditions the U–10 Gaels were triumphant in the final beating Burren in a hard–fought contest. The Gaels were presented with the Paul Gallagher Memorial Cup. The Ogs who also played very well in all their games before losing out narrowly to Ballyholland in the semi -final. Ballyholland went on to win the Ogs Competition beating a strong Clonduffside in the final and taking home the Liam and Noel McClorey Memorial Cup. A huge thank you to all the volunteers who helped to make the tournament a great success and also to all the competing teams and managers

All proceeds from the tournament were donated to Kayden McKeown and family. Kayden McKeown is a 5 year old boy in our community who is currently battling Leukemia and our thoughts are with Kayden and his family at this very difficult time.

Gormans Bar is hosting a quiz night on Saturday 12th October for Kayden McKeown and family and if anyone would like to donate prizes for the raffle they can be left in Gormans.  It is hoped to raise as much money as possible to help the McKeown family at as this very worrying time.

Mayobridge travelled to Castlewellan on Wednesday evening for the U–14 LGFA Championship B semi -final which turned out to be a brilliant game of football. Castlewellan took an early lead and finished the first half three points in front. In the second half the home side built up a seven point lead and things looked bleak for the Sky Blues.  The team however were not going to go down without a fight and stunned the Town with two fine goals to reduce the deficit to a minimum.  In the closing stages the Bridge tried hard to get back on level terms but Castlewellan defended stoutly and eventually won through on a final scoreline of 3-7 to 4-3.
Despite the defeat the girls can be very proud of their efforts and if they keep playing to this standard of football the future of ladies football is definitely bright for Mayobridge. Well done Ladies.

The camogs, U–6, U–8 and U–10’s travelled to Ballela on Sunday morning for their last blitz of the season. A great morning of camogie and skills were on display with some terrific tackling. The girls were all presented with medals from Helen McAleavey Down County Camogie Chairperson. It was a nice tournament to end the season. Thank you to all our coaches and mentors for their hard work, commitment and enthusiasm towards our girls. Finally well done to all our underage camogs.

Mayobridge U-6 footballers finished their season early on Sunday at a blitz in Warrenpoint. Both teams played brilliantly over the five matches. Some great skills were on show! Good luck to all the kids moving on to under 8’s and we look forward to seeing the new squad joining next year.

Commiserations to the minor team who were defeated in the semi-final of the championship by favourites Kilcoo in Tullylish on Tuesday evening on a final scoreline of 4-10 to 0-11.