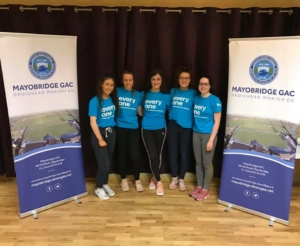 Five of our U-16 camogie players, pictured above, have volunteered to travel in June 2020 with the charity Habitat for Humanity to try to help address the housing need in Romania. Despite the fact that Romania is part of the European Union, more than 5 million people live in extreme poverty including more than 2 million children. The girls will spend 10 days in Romania as part of a team who will assist in building and renovating homes in partnership with low income families throughout the country. This will range from one-house builds to 10 or more houses in just one week. The club is determined to help the girls in every way we can for this worthy cause and to this end we will support the girls with their various fundraising initiatives in the weeks and months ahead.
The first event will be a table quiz in the Canal Court Hotel on Wednesday 4th December at 9pm. The second event will see the girls helping out as Santa’s Elves at the Christmas Big Breakfast on Saturday 21st December in Mayobridge Social Club running from 9am-1pm..
Finally, a big congratulations to Grace, Caitlin, Mollie, Aoibheann and Ella who will give up their time to participate in this worthwhile cause. Well done girls.

Pre-championship favourites Carryduff lived up to that label on Sunday afternoon with a well merited victory over Mayobridge in the Down U-21 final at Newry by 0-14 to 1-8. The Belfast side however had to fight hard for this win as the young Bridge lads were very gallant in defeat and although disappointed with the result they can be very proud of their efforts. Eleven minutes into the game Carryduff led 0-4 to 0-2 but the Sky Blues then stunned them with a brilliant goal from Adam Crimmins after a clever pass from Shea McConville. Unfortunately the Bridge did not build on this and five unanswered points saw Carryduff go into the break leading 0-9 to 1-2.
The second half saw the Bridge narrow the gap to two points but that was as close as they got as Carryduff clung on for the win. In truth however the deficit could have been far greater but for the heroics of goalkeeper Sean McLoughlin who pulled off ta series of top class saves to keep his team in the game.
Mayobridge team and scorers: Sean McLoughlin, Shane Keenan, Jamie Mckay, Conaill Gallagher (0-1), Shane Annett, Reece Martin, Ryan Byrne(0-1), Daniel Catterson, Sean O’Hare, Shea McConville (0-1), Shea Byrne (0-3), Shane Smyth, Liam McManus, Adam Crimmins (1-2), Daniel Bannon.
Subs: Charlie Smyth, Liam Mathers, Aaron Gribben.

Well done to our Ceile dancers who were awarded first place in the South Down Scór na nÓg finals on Saturday and to our set dancers to who took second place. The club would also like to congratulate all our acts who took part on a terrific afternoon all round and thoroughly enjoyed by all who attended. Well done everybody.
Mayobridge GAC would like to offer a huge congratulations to Amy Murney on her selection to the LGFA U-15 Down County Panel. The club would also like to congratulate Ellie Carr and Laura Greenan on being selected to attend the next stage of the Down U-16 LGFA trials.
Well done ladies.

In preparation for next season Mayobridge GAC will be running a Safeguarding Awareness Course on Tuesday 3rd December, 7pm-10pm. This course is for anyone wishing to help out at our Club. It is compulsory that this course is completed before anyone can volunteer within our organisation
The club will be running a GAA Foundation training course for our Coaches who have not yet completed this foundation level, on Saturday 7th December from 9.15am-4pm. This is a GAA Foundation Award and we invite our coaches who will be training our members next year and who do not hold the award to attend. May we also remind you that this is compulsory for any coach that does not hold the foundation award. Please save the date.
Mayobridge GAC Annual General Meeting will be held on Tuesday 10th December in the Social Club at 7.30.pm. All members of the local community will be welcome at the meeting as the club prepares for the 2020 season.
The Senior Members Christmas party takes place on Sunday 8th December.
The Committee and members of Mayobridge GAC would like to express its deepest sympathy to former Ladies Committee member Bridie Quinn on the death of her sister Mena Smith and also offer sincere condolences to Mena’s sons, Cathal and Owen, sister Margaret and the extended family circles. May she rest in peace. Mary Queen of the Gael pray for her. The club also deeply deeply regrets the passing of May McKeever (Dorsey, Cullyhanna), grandmother of our senior team manager Ciaran. We convey our deepest sympathies to Seamus, Sean, Peadar, Bernard, Michael, Cathal, Eileen Agnes , Eilis , Siobhan , Noleen and the entire McKeever family circle. Ar dheis Dé go raibh a hanam.
Lotto numbers for Monday 18th November were: 5, 10, 11, 27. No jackpot winner. Twelve match 3 winners, Seamus & Ann Grant, Stephen Doran, Paula Strain, Brian McKevitt, Eugene O’Hare (All House Draw), Kevin Franklin (Colleen Franklin), Rose Cunningham (Caolan Gallagher), Frank Mooney (Gallagher’s Bar), Kathryn Rooney (Noel Rooney), Tim Colhoun (Aidan O’Hare), Ciaran Cunningham (Kate Cunningham), Bernie Hillen (O’Hare’s Eurospar). Jackpot now £10,600.
Promoters Draw Winner: Noel Rooney.