MAYOBRIDGE NOTES
Congratulations to the Mayobridge Thirds team who reached the final of the Down Reserve Championship on Sunday evening when they turned in a masterful display to easily overcome visitors Kilcoo on a final scoreline of 5-17 to 1-10. Well done to the team and management.
Good luck to the senior football team when they play Ballyholland in Burren on Sunday evening for a place in the semi-final of the Down senior championship, throw-in: 7.00.pm.
On Friday evening in Downpatrick Mayobridge senior team recorded an important win in their fight to avoid relegation from Division One when they defeated the home side by 1-10 to 0-8. The next league game is scheduled for Saturday 21st September in Mayobridge against fellow strugglers Castlewellan, throw-in: 5.00.pm.
Mayobridge secured a place in the South Down U14 football final with a magnificent display at home on Monday evening against a very good Atticall side, winning on a final scoreline of 4-17 to 3-8
The Bridge played against the wind in the first half but got off to the perfect start with an early goal to settle the nerves. As the half wore on, the Sky Blues were very dominant and by the end of the half opened up a sizeable lead, going in at the break 3-9 to 0-3 ahead.
Atticall fought back in the early part of the second half and scored a couple of goals from their strong running midfielders. The Bridge lads dug in and some great score taking saw them pull away again. Atticall weren’t finished however and a goal and a couple of points kept the game alive. In the closing stages the home side upped the tempo again finishing strongly to clinch their place in the final. Well done boys.
Team and Scorers:
Conor Pollard, Ciaran McPolin, Arann Trotter, Peter Little, Shan Hillen, Paddy Clyde, Daniel McMahon, Danny Cunningham (0-6), Senan Magone (0-1), Daire O’Keeffe, Brian Grant (2-7), Ben Kelly (1-1), Tristan Downey (0-1), Conor Colhoun, Cory Clerkin (1-1), Ryan Magee, Keith Rice, Aaron Doyle, Darragh Poland, Ryan Cahill, Pierce Cuthbert, Michael Gallagher, Cory Magone, Patrick Woods, Conor Keenan.
Well done to the U16 footballers who reached the South Down championship final with a hard fought victory over Newry Bosco on Thursday evening. Trailing by four points at the break the young Sky Blues turned in an excellent performance in the second half to win on a scoreline of 4.13 to 2.12 with Jamie Cahill the “Man of Match”. 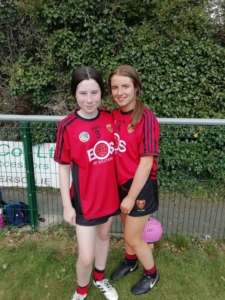 Congratulations to Jessica Gribben and Carragh McConville, pictured above, who played for Down on Saturday in the All Ireland U14 Camogie blitz in Dublin.
Missing from the photo was Orla Crimmins who unfortunately was sick and could not make it. Get well soon Orla.
Commiserations to the senior camogie team who lost out to Castlewellan by 2-6 to 0-6 n in the semi-final of the Down Intermediate Championship on Wednesday evening.
Lotto numbers for Monday 2nd September were: 1, 4, 11, 32. No jackpot winner. Four match three winners, Sheila McManus (Tommy White), Orla McElroy (Tommy White), Colm Magee (Carol Magee), Tracey McKeown (Katie McClorey). Jackpot now £15,800.
Promoters Prize Winner: Paula Magee.