Mayobridge U16 Camogie team
On Sunday Mayobridge U-16 camogie team travelled to An Riocht as holders of the Sharon Morgan Sevens Tournament and looking to win it for the second year in a row. The first match against Longstone saw the girls through after a good display of skill, determination and teamwork. Kilcoo came next and again the team rose to the occasion and won the game well. In the final group match Greenlough from Derry were the opponents and after a shaky first half the Bridge took total control and finished top of a tough group having won all their matches. In the quarter final the girls were paired with the Loup from Derry and they continued their winning streak with an admirable win. Meeting Middletown from Armagh in the semi-final was as expected a tough match but again the Bridge emerged victorious. Ballygallget were the opposition in the final and the Sky Blues knew they would be up against it and so it proved as it was the team from the Ards that won the competition as the Bridge fell short by a few points.
Despite the defeat the whole team can be very proud of their efforts and they were a credit to their club. A special mention must go to Grace Cunningham who was awarded player of the tournament. Well done Grace.
Mayobridge team was: Ceri Magone, Aoibheann Woods, Emily Fitzpatrick, Ella Gribben (Captain), Aoife Trainor, Grace Cunningham, Caitlin Coulter, Katie Rooney, Cara Crimmins, Cliona Gordon 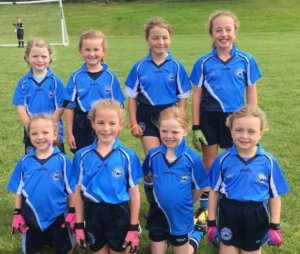 Mayobridge U-8 Football Team
The Mayobridge U- 8 girls football team went to Saval on Sunday morning to take part in a blitz competition. The girls played five teams who were much stronger than them earlier in the season but they more than matched them in this competition which showed that the practice at training and at home is paying off. Their determination and team work is a credit to their families. Well done girls

Congratulations to our senior Scór member and guitar maestro Jordan Lively on winning the Belfast Guitar Festival’s Young Guitarist of the Year. Well done Jordan.
Mayobridge camogie squad welcomed former Tipperary goalkeeper, two time All Ireland winner and All Star Ken Hogan to the club on Tuesday night where he led a fantastic coaching session for our girls. The management team would like to thank Declan Mason for arranging this visit and a special mention to Ken Hogan for travelling to the club to share his knowledge, skill and experience.

Twenty five years ago the Mayobridge club were honoured with Francie Poland, Mickey Linden and Shane McMahon being members of the great Down team to take Sam Maguire to the Mourne’s for the fifth time. On Sunday in Croke Park before an attendance of over eighty thousand spectators this great side were presented during the All-Ireland football final. Thanks to all for the memories.

The Committee and members of Mayobridge GAC are deeply saddened by the passing of former player, Stephen O’Hare, a member of a family that has contributed so much to the Mayobridge club over a long number of years and would like to express sincere and heartfelt sympathy to his daughter Roisin, sons Hugh and Gary, his brothers and sisters and the extended O’Hare family circle. Ar dheis Dé go raibh a anam. The club would also like to express its deepest sympathy to our underage coach John Paul McPolin on the death of his mother-in-law Marian Hughes and to offer sincere condolences to the extended Hughes family circle. May her gentle soul rest in peace.